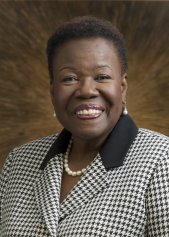 Jan Adams held the rank of Chief Master Sergeant before retiring from the United States Air Force, after 24 years of outstanding service. She founded JMA Solutions in 2005 and has grown the company through hiring outstanding staff who assist the Federal Aviation Administration and other clients in the areas of program and project management, air traffic management, engineering services, cybersecurity, and more. She currently has 170 full-time employees and over 40 percent of her management team are prior military.

Ms. Adams is very active in the community. She serves as a board member for NFL Buffalo Bills Corner Back, Josh Norman’s Starz24 charity organization, the Mamie Mallory Education and Scholarship Foundation, the African American Civil War Memorial Foundation, and is an Honorary Board Member of the Thelma D. Jones Breast Cancer Fund.

She is a member of the Air Traffic Control Association, the DC Chamber of Commerce, the Economic Club of Washington, the Nominating Committee for the Arena Stage Theater’s Board of Directors, the University of the District of Columbia’s Foundation, Inc., and a former trustee of the District of Columbia’s Retirement Board. In addition, Ms. Adams also serves as a coach and mentor for the Babson College Black Women’s Entrepreneurial Leadership program and is a corporate partner of the D.C. Adopt-a-School program.

Under her leadership, JMA Solutions has won numerous awards that include INC. 5000’s Fastest-Growing Private Companies in America, the DC Chamber of Commerce’s Community Impact Award, The Washington Post’s Top Workplaces for the D.C. area, and the Disabled American Veterans’ Small Employer of the Year Award.

In November, Ms. Adams received the DC Chamber of Commerce’s Chairman’s Choice Award. In April 2019, Ms. Adams was inducted into the Washington, DC Hall of Fame for her dedication and outstanding contributions to the D.C. business community. In October 2020, Ms. Adams was announced as an Entrepreneur of the Year Mid-Atlantic Award Winner by Ernst & Young.

This email address is being protected from spambots. You need JavaScript enabled to view it.